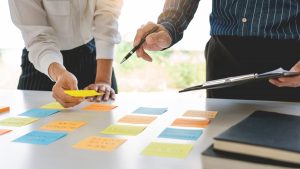 I learned early on in my career, the problems of the “busy fool syndrome”. In my first role, we worked on solving organisation problems, usually as solo analysts and with multiple projects at any point in time. We became professional plate spinners. This makes for a great spectacle but of itself does not add value.

In contrast, in my second career role, we looked at redesigning failing areas of the organisation using dedicated multidisciplinary teams. We designed out issues that would have been considered problems to solve in my first role. This resulted in quicker and deeper change.

The truth runs counter-intuitive for most organisations – the more we attempt to do, the less we deliver. We spread ourselves thinly rather than deeply.

The failure of organisations to decide on the MAIN THING and to keep it the MAIN THING, costs them dear. Attempting too many improvement projects leads to lost time and delayed improvement.

How do organisations progress the MAIN THING?

Firstly, make the tough decision and decide what is the MAIN THING for your organisation. If the organisation has operational problems delivering the committed business plans then this should be the MAIN THING.

Thirdly, keep focused on the MAIN THING by being clear about the benefits and the deliverables. For example, if the business need is revenue growth, the deliverable is not a new product but orders for the new product obtained by a trained and committed sales team, with the necessary customer and internal support in place.

Fifthly, keep the MAIN THING the MAIN THING until the necessary benefits result. The bottleneck for delivery will not be in the difficult leadership team thinking at the start of the programme, as many believe, but in the tough leadership decisions during the implementation phases. Sadly, many leaders are on to the NEXT THING by the time this is needed.

If you are a leader and want to see real change in your organization, my advice is shorten the wish list (dramatically) and rather than demanding more variety of change, demand more depth, speed and outcomes on the MAIN THING.